Damon Gough is an artisan of sound. He has a seemingly effortless gift for melody, which is bolstered by the lushly beautiful, rich arrangements he sprinkles throughout his albums. And these lilting, often complex arrangements presaged the current indie trend of incorporating traditionally symphonic (or even gypsy) instruments, like French horn, trombone and cello, that we see with newer artists like Beirut and Sufjan Stevens. It's the kind of music that folks wind up identifying with as the soundtrack of their lives. Hence, it should come as no surprise that one of his most accomplished and best loved albums is the soundtrack to About A Boy.

Considering the sweet quality of his voice, what you get onstage in Damon Gough the performer seems like a disconnect. In person, it's not the honey-sweet, melodic tone that we find personified in front of us, but something more analogous to the boyish quality of his voice. What we see standing before us is a husky man-child, capable of being by turns both adorable and gruff, like the changing moods of a boy.

Watching Damon Gough is like watching a changing tide. He goes from hushed storytelling, giving anecdotal background behind how he wrote a song, to annoyance with himself at missing a lyric or note, giving up on a song mid-way like a frustrated kid. Frankly, I find the honest lack of pretense appealing. It's as if he's saying, "Yeah, so I f'ed up, on to the next one. It was bollocks, so who cares?"

This is not a highly glossed performance, packaged for mass consumption with a veneer of slickly choreographed Top 40 sheen. No, we leave that to the Justin Timberlakes of the world. Instead, this is a highly personal performance, with none of the artifice.

The presentation of his public persona is far more moody than his melodies would imply. But that's part of the entertainment with Damon Gough. The reality is a small thread of gruffness and a modicum of discomfort in the spotlight in front of adoring strangers.

That's not to say that he's an inexperienced or reluctant performer. On the contrary. It just means the Manchester native isn't looking to become a superstar with a spot on the Hollywood Walk of Fame.

Case in point: After moving to the keys, the flash of the photographer next to me in the photo pit distracted him enough to botch the opening of a tune. So he stopped and addressed her directly, "You've thrown me off." At which point he stood and said, "Alright, let's have it then," as he struck his best GQ male model pose. Which was ironically remeniscient of his faux fashion spread in Rolling Stone, dissecting the scruffy style of the badly drawn boy. He just looked like an adorable, overgrown kid, giving the photographer a hard time, while simultaneously being endearing, giving her a great shot, and the audience a good launch at the same time. At which point he sat back down at the keys and resumed the start of the song.

This is the Gough show, and so his touring band remained respectfully in the background. But what they lacked in flambuoyance, they made up for in their solid musical support. And this allowed Damon to let the strength of his songwriting shine through.

I'll be blunt -- I had wondered how he'd translate his lush studio orchestrations into a decidedly indie live show. I assumed it would just be him, solo, on an acoustic, as a standard backing band couldn't possibly convey the many layers of his arrangements. The fact that these tunes were everything an audience could have hoped they'd be is a real testament to his songwriting. No matter what the arrangement, lack of string section be damned, each song brought the same lyrical atmosphere, melodic tunefulness, and packed the same emotional punch as if he had all the strings and brass to back him.

Pared down to its indie underpinnings, softly solo, or majestically wrought, Badly Drawn Boy's music is beautiful, and translates just as beautifully live. And the live show provides a rare glimpse of the man behind the music. He, who captures emotion in song, and wears his moods on his sleeve... or shyly peeking out from under his trademark hat.

P.S. And you know what? I've never heard Webster sound so good. It's the first time I've seen them get it right. 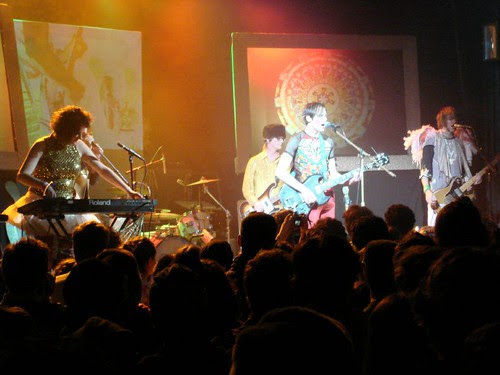 Of Montreal, the outrageous Athens band about whom I've gushed so much, rocked New York's Irving Plaza on 3/9/07. Led by prolific frontman Kevin Barnes, they brought tunes from their new album, Hissing Fauna, Are You the Destroyer to an enthusiastic, sold-out crowd. And a drunken evening dancing our @$$es off was had by all.

Check out photos from the show: 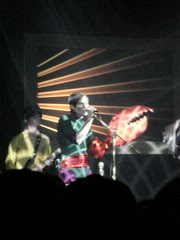 Watch video of how they brought the disco to two of my fave songs from the show:


I Was Never Young


...and yes, that's a shameless TixGirl screaming in the background.

Being one of the lucky audience members to catch the opening show of The Decemberists' new tour at Loew's Landmark Theater in Jersey City, I can assure you that this is one Summer tour you absolutely should not miss. 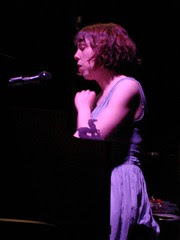 An ideal tour opener, the 3/21 show was informal enough to give Colin & Co. the opportunity to stretch their wings and experiment with the set list in an intimate setting full of adoring fans, save the odd meathead or two, yelling "Freebird" and embarrassing the rest of us on behalf of the Tri-State area. (I mean seriously, people. Why on earth would you bother getting off your duff to see Colin Meloy, the quintessential storyteller, just to yell "Shut up and play!"???) Meatheads aside, it was a near religious experience I can't wait to try and replicate. So imagine my glee when I discovered that they've added another NY show -- and this time at Central Park's Summerstage, no less! Best of all, if you buy tix during the presale, you'll be spared the usual handling fees. Details are below, courtesy of the official Decemberists site...

The Decemberists playing at Central Park Summerstage in July

The Decemberists are playing Central Park Summerstage in New York City on Monday, July 16th, 2007 with special guests Grizzly Bear! Presale tickets are now on sale. By buying tickets through the presale, you'll be able to get your tickets before anyone else and save some money on service charges. And unlike some presales, you don't have to pay fan club fees to participate! 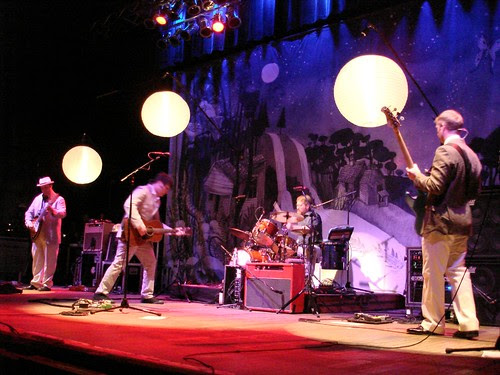 >>MORE PHOTOS: See a gallery of shots from the show<<

Falling neatly under the "Aw, HELL no!" category, is the following hilarious little video, courtesy of the folks at SUPER DELUXE:

Yet another reason to add to the "Why I'm moving to Ireland someday" list, County Kildare can be added to the likes of Glastonbury and Reading as holding one of the biggest, coolest festivals in the world. What makes it worthy of joining the pantheon of great European fests this year? The 80,000-strong audience is responsible for setting a record, selling out the 2-day festival in 1 hour and 10 minutes flat. Yes, that's 80K people all purchasing their tickets within a 1 hour and 10 minute window. And without even knowing the final festival lineup. Incredible.

And why a clean sweep? Oxegen is the first European Festival to feature hot showers for its attendees! Yes, that's a two-day fest with showers. Unfathomable, isn't it? Oh the bliss! (*sigh*)

Tickets are sold out according to the official Oxegen Fest site, but you can try your luck with a ticket reseller.

Memphis is a music city. And so it deserves its own festival. And throw a festival it will.  On four stages May 4-6 at Memphis' Tom Lee Park, the fest is a musical tribute to the river city, featuring a diverse array of more than 60 acts with Memphis roots. Best of all, it avoids being genre-centric and embraces every musical form from Soul to alternative to blues, much like its host city. Even greats from the past, including the Allmans and legend Jerry Lee Lewis.

Here's the deets, courtesy of LiveDaily.com:

BUY BEALE STREET TICKETS: A three-day pass costs $59.50 through April and goes up to $75 thereafter. Daily tickets are $25 in advance and $30 at the door.

The Beale Street fest is part of the month-long Memphis in May celebration, which also includes the World Championship Barbecue Cooking Contest, International Week (this year honoring Spain) and the Sunset Symphony. Details about all the events are available at the Memphis in May website. 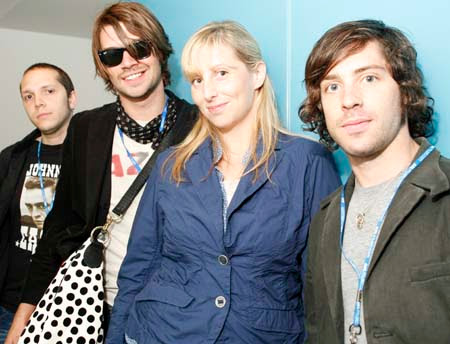 >>TixGirl with Taking Back Sunday at the MTV VMA Style Studio

What do they have in common? I guess you could say they all have sort of a glammy, theatrical take on presentation. The first half are retro, and the second half are neo-retro. But what really ties them all together is the rallying cry of Cyndi's support of the Human Rights Campaign, a gay-and-lesbian advocacy group. A good cause, and a good cause to hit the road.

Hey Warped Fans, this one's for you: The country's longest-running touring festival has announced their tour schedule, as well as an updated (and greatly lengthened) list of bands.

Presales start for members of the Warped Tour online community on April 1st. According to LiveDaily.com, "Through the website offer, fans can get a concert ticket and a copy of the 'Vans Warped Tour' two-disc compilation CD for $19.99. The price after the pre-sale is $25."
Now how's this for something nifty and new... The official Warped Tour site provides the usual tour schedule, but warps it. Click on the little people icon to the right of each date, and you'll get the concert details, a running count of Warped Community Members who are going, and a facewall of exactly which Members will be at the show. So spot a cutie on the list, and use the comments section to see if you can catch up with her at the show. Yo, check it: http://www.warpedtour.com/warpedtour/concert.asp

Here's the full list of participating bands, followed by the tour sched, courtesy of LiveDaily.com:

Attention Chicagoans and music fans willing to travel for an amazing festival! The lovely folks at Lollapalooza have lost their minds. They're holding a secret sale where subscribers of the Lollapalooza Fan List email can get a 3-day pass ticket for only $60!  (Sign Up!)

Could it possibly be true? Yes it could, and it is!  Here's the dealio:

With their glittering retro-disco sound and trademark bawdy humor, it was outrageous fabulousness everywhere we looked last Saturday, 3/3 when the Scissor Sisters gave us a roof-raising night at the Theater at Madison Square Garden.  Happy to be back in NY after months of globe-trotting, it was a night of rousing sing-alongs and "damn right, Sister!" cheer-alongs that the band called the best of their tour.

>>Check out a gallery of photos from the show<<

The mysterious band of bears from Sweden took over New York with a rowdy gig, live at a private party thrown by Filter, GBH & Music Nation at Hiro Ballroom, at New York's Maritime Hotel, 3/1/07.

>>Check out the full gallery<<