Looking for something extraordinary to set this New Year's Eve apart from all that came
before? Say it with me: "Gogol Bordello"

Yessiree, the band that brought Gypsy Punk to the masses is celebrating the birth of
another year at my new favorite NY venue, Terminal 5. Why is this so extraordinary?
Well, first of all, it's Gogol Bordello. And that means it's one of the most wild,
unabashedly rowdy live acts you'll ever see. That energy whips their fans into a frenzy the
likes of which I've rarely seen at an indie rock show. 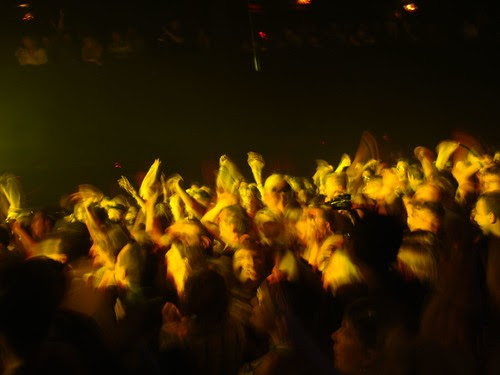 Just look at what they did to the crowd at Irving Plaza last July (above). Then imagine
that magnified by the size of Terminal 5 (below). Can you picture the party? Not quite convinced? Check out how Eugene Hutz & Co.
bring down the house on a date of no particular annual importance, and imagine how that
would translate to New Years eve...

Yeah, now you see what I mean. But will I see you there? We shall see...

Bumbershoot is one of the best reasons I can think of for loving US music fests. Not that
I have actually been to Bumbershoot myself, mind you. I know, I know, you're thinking
"how can she make some grandiose statement like that without firsthand experience?!"
You're right. So maybe I should take advantage of this uh-mazing offer and 'go west,
young [wo]man!'

Here's the deets, straight from the Bumbershoot peeps:

It's an Insider's Deal just for BumberFans. The best part is BumberFans can

Yes, you read that right. You can lay your hands on a 3-day pass for

whole day of party for free! These tickets aren't available to the public, and

they're never going to bethis cheap again, so don't put it off or you'll kick

All you need is the special code that allows you access!

You ready? Here it is: BUMBERHOLIDAY.

THE VIEW FROM MY SEAT: Via Audio Live at the Lion’s Den in New York

Via Audio are my new favorite cause. I want to help the whole world learn their name,
learn their tunes, and learn to love them the way I do. Alas, I doubt my modest blog has
quite that kind of reach... But CMJ sure does. In fact, that's exactly what CMJ is all
about: Taking the unknown, unsigned, or otherwise undiscovered and elevating them to
the forefront of crowd consiousness. A showcase at CMJ gets 'em where it counts -- a
packed audience full of future fans in the making, and music industry influencers.

After months of near misses, I finally had my shot at seeing the one local Brooklyn band I
wanted to catch above any other at CMJ. With a slot just before the Meat Puppets, the
Lion's Den sported a packed house for Via Audio that 10/17 evening. They're a little
unpolished, a bit sloppy, and even over-excited at times. But with some time to grow,
their live performance will catch up with their songwriting. 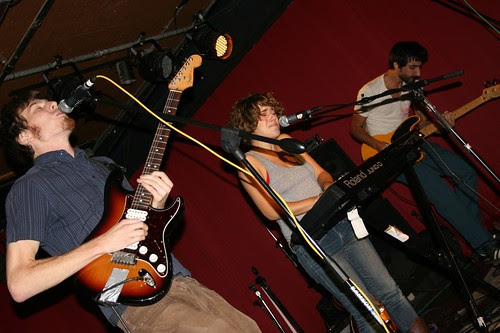 That songwriting is downright formidable at its highest points, as you can plainly hear
on their debut album, Say Anything. These kids think in pop confections whose melodic
simplicity is beautiful... and catchy as hell.  Each one of them has a point of view. Each
one a marked style, presence and personality onstage. Give them a listen and you'll pick
up on hints of both of Montreal's whimsical pop tunesmithing, and delivery akin to Mates
of State (who also played that evening across town at Avalon).

Take in some of this footage, and you'll hear the roots of something special in the making.
With an ever-broadening fan base, much of which is thanks to their CMJ face time,
they're sure to clock more time onstage. I'm looking forward to watching their live show
mature in front of my very eyes. Join me, and when they explode, we can all say we
knew them when.

Seeing the as-yet undiscovered hit the radar for the first time. Isn't that exactly the point of CMJ? 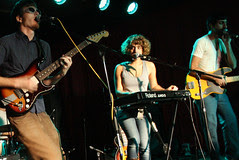 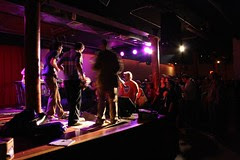