What's more fashionable than a big bust? A big Bust Magazine launch party. Yessiree, it was a look-at-me fest at Fontana's last night, where the hipster femmes flitted about feeling fabulous about their busts. I mean their new copies of Bust - you know, the one with Eve on the cover, flashing the claws that famously festoon the tops of her t!t$.

What was it going to take to get us in the mood? Some live music from a pair of New York's fave female-fronted electro outfits. Heloise & the Savoir Faire followed Mixel Pixel to the tiny stage. Could the one out-weird the other? I think not! This is New York, baby, where the fashionable set sings, "I keep on dancin, baby, yeah yeah yeah." 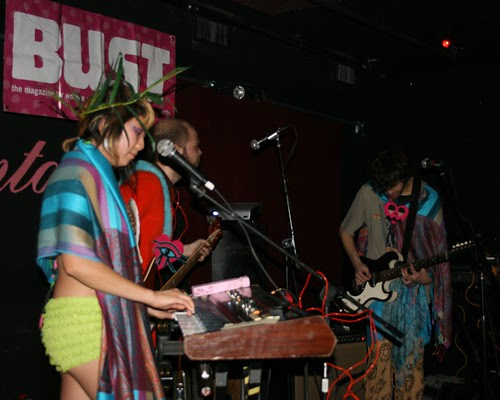